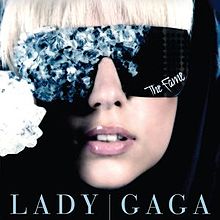 The Fame is the debut studio album by American recording artist Lady Gaga. It was released on August 19, 2008 through Interscope Records. After joining Kon Live Distribution and Cherrytree Records in 2008, Gaga began working on the album with different producers, primarily RedOne, Martin Kierszenbaum and Rob Fusari. Musically, The Fame is a synthpop and dance-pop album that has influences of pop music from the 1980s. Lyrically, the album visualizes Gaga’s love of fame in general while also dealing with subjects such as love, sex, money, drugs and sexual identity. Promotion was primarily through The Fame Ball Tour and multiple television appearances. The Fame was included as a bonus disc on the deluxe edition of the extended play, The Fame Monster (2009).